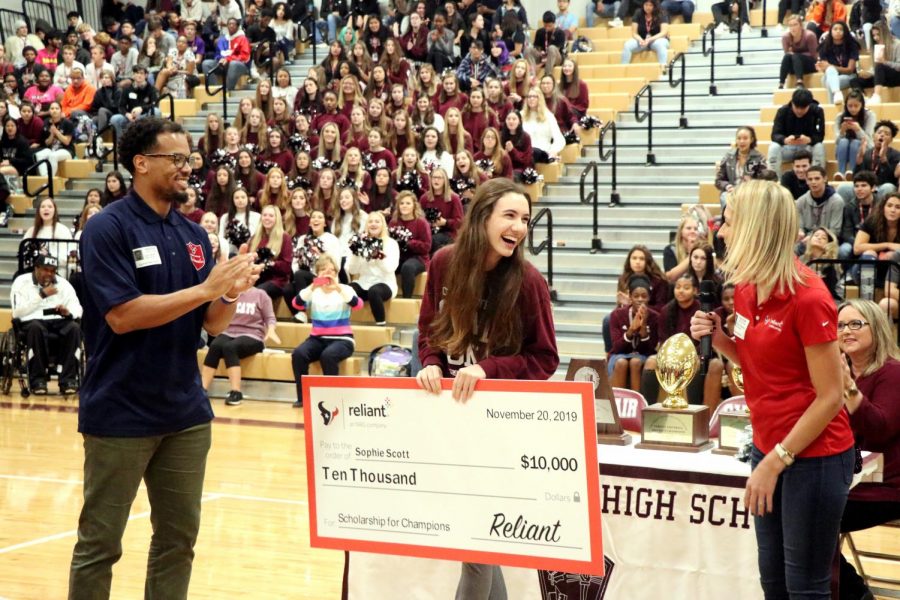 What is it like to play a flag football game with Houston Texans players, get a $10,000 scholarship and four tickets and sideline passes to a Texans game?  Just ask Cy-Fair High School senior Sophie Scott who was awarded all of these from the Scholarship for Champions Program.

Reliant Energy and the Houston Texans awards high school student-athletes who have exhibited remarkable leadership on the field, in the classroom, and throughout the community.

“I was super taken back even when my coach called me to tell me about the nomination,” Scott said. “It’s crazy to sit there knowing others look up to me and inspiring.”

During the presentation, before announcing who the scholarship was being awarded to, Shorts went on that this young lady had overcome kidney failure during her freshman year. He also added that her story impacted him personally due to his son having gone through similar issues.

“It was amazing to see how far the impact of my story can go,” Scott said. “It meant a lot to know I had impacted him and his life. It put a lot into perspective realizing that someone I had never met knew my story.”

Scott acknowledged her family and team for this honor.

“I give credit to both my coach and team on the court and my family off the court,” Scott said.  “At practice, I was pushed to keep the team balanced by making sure the team was having fun, but staying on task and working hard.”

Along with her team, Sophie’s parents were there to be part of the celebration.

“Off the court my parents push me to be a leader by showing me how to treat people and always supporting me,” Scott said.  “Growing up with three siblings also gave me skills to be cooperative and flexible about things.”

Scott’s co-captains, seniors Lauryn Bourne and Amari Alford, said that Sophie is like a sister who will always have their backs.

“The thing that went through my mind [when they were announcing the recipient] was this has to be Sophie she is just a good person and she deserves this,” Bourne said.